Manning & Manning as it's known today, has been the life’s work of well-known Savile Row tailor, Bryan Manning.

Born in Colchester, England in 1937, his family moved to London in 1940. Having attended St. Aloysius College from 1948 to 1953 with peers including Peter Sellars and Michael Gambon, he began his apprenticeship in tailoring with highly regarded Savile Row tailor, Kilgour French and Stanbury.

The decision to go into tailoring as a career was, to quote, ‘the path of least resistance’. With his Grandfather, Great Uncle, several Uncles and Aunts as well as his elder brother already working in the trade, it was assumed that Bryan would follow in the family tradition.

Being called up for National Service from 1955 through to 1958, wasn’t part of Bryan’s grand plan, but he was able to continue his apprenticeship with Kilgour French and Stanbury on completion of his three-year’s service. 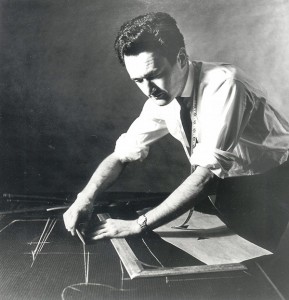 His next big break in tailoring circles came when he landed a Trainee Cutter position with the official tailor to Eton College – Welsh and Jeffries, in 1959. The following year, he took up the same position with Kilgour French and Stanbury.

After spending four years mastering his trade, Bryan officially started working for himself as a bespoke Savile Row tailor. 1967 saw the start of a three-year tailoring partnership with his brothers, but when they both left for various reasons three years later, Bryan continued the business on his own.

Bryan opened his first shop in 1970

Upon opening his first shop in St. Christopher’s Place, London W1, Bryan began to establish a regular clientele, many of whom are still customers today. Based on the success of his shop and, the many overseas customers he had accrued, Bryan decided to start making regular trips to the USA to see clients. Business was booming and there was more work than any one man could handle!

So, in 1978, Bryan decided to partner up with Leslie Morris to start a company called Manning Morris and Stone in James Street, W1. Unfortunately in 1981, Mr Morris retired and Mr Stone passed away, so Bryan moved his business to 2 Savile Row but continued with the company name for a further three years.

Bryan Manning was awarded an Emmy in 1985

“Wallenberg: A Hero’s Story” for which Bryan was awarded an Emmy in 1985

Reverting to the business name Bryan Manning back in 1984, he began work on the costume design for TV series “Wallenberg: A Hero’s Story” for which he was awarded an Emmy in 1985. Responsible for the making of Richard Chamberlain’s wardrobe, who was nominated for a Golden Globe for “best performance by an actor in a mini-series or motion picture made for TV” for the same series, Bryan undertook an awesome task. About thirty suits, four overcoats and additional jackets and trousers were to be made in an almost impossible time frame.

Bryan was flown to Hollywood to measure Richard Chamberlain at his home and then, working from drawings by well-known Hollywood designer Tommy Welsh, together with access to original photos, Bryan was able to produce the styles of the times. Richard Chamberlain arrived in London with a superbly cut, handmade period wardrobe ready for his departure to Hungary where the TV series was shot. 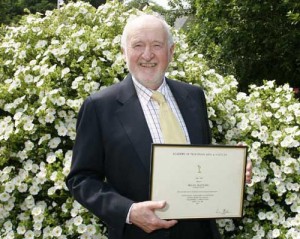 Bryan with his EMMY - awarded in 1985 for “Wallenberg: A Hero’s Story”

In 1986, Bryan moved to Maddox Street, on the Corner of Bond Street, still in the renowned tailoring area of London W1. After a few years it became obvious that in the face of the inconvenience caused by wheel clamping and ever stricter parking policy a new higher level of service to clients was needed. This took the form of becoming a visiting tailor, if clients found it hard getting to the tailor, the tailor would go to them. Bryan closed the Maddox Street showroom and arranged serviced showroom facilities back in Savile Row. This allowed him to either see clients there, or at their offices.

In 1997 he was joined by his son Timothy who immediately became very active within the firm. He introduced IT and new business methodologies to the business and recognised the value of the Internet for identifying both new clients as well as new systems. Tim developed the website and was instrumental in introducing high technology solutions to meet the growing crisis of years of diminishing numbers of young people studying the trade. Between them they have introduced many innovations in the making processes while maintaining the quality that make Savile Row suit so famous.

Many clients have already taken delivery of suits that have benefited from these innovations and have been delighted with the craftsmanship. As each item is hand-sewn as is traditional for a Savile Row suit, each is individual and unique. 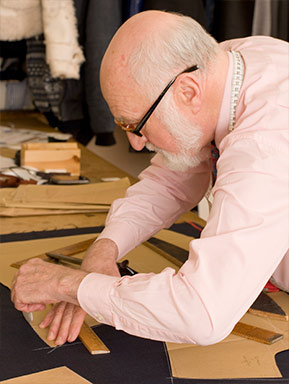 Bryan looks to the future with the same determination that has made him the success he is today and with the life-long dream that has finally come to fruition unfolding before him, with his son Tim, working with him to carry on the dream

I've been a customer for 6 years only, but I can no longer imagine obtaining my business clothing and leisure wear from anyone else.

“Bryan, I must tell you -- you are the absolute best bespoke tailor. I'm glad my brother-in-law helped me to find you online in early 2009. Simply put, you are a master craftsman. Men and women should be lined up to learn the profession from you...